Enabling the transition by powering humanity to achieve Net Zero.

Enegix has been established with a vision to deploy and manage renewably powered, utility scale energy grids powered by hydrogen which is a key component in our strategy and will be used for electricity storage and distribution, transportation, fuel applications and re-electrification power plants to power the shift to renewable, zero emission economies in key markets.

A new model for
sustainability through
our Zero Carbon Platform.

Enegix is pursuing a new model for sustainability enabling the energy transition by using renewable power at scale for green hydrogen production, innovative transportation technologies, and fuel cells and gas turbines to supply fuel and power through our Zero Carbon Platform.

Watch our keynote livestream event announcing Enegix and our Base One Project in Brazil.

The future of energy is green, sustainable and for all people.

Almost 1 billion people without electricity around the world

Energy increase needed to keep pace per year until 2040

Enegix is developing Base One, the largest hydrogen project in the world which will be located in Ceará, in the north east of Brazil. The three year project produce enough green hydrogen to power the lives of over 200 million people in developing economies without emitting any carbon. Using a power to power strategy to replace expensive, high emission power grids with renewable, baseload, and cost effective zero carbon grids, Enegix plans to create a new model of sustainable energy that powers humanity without costing the earth.

Globally we emit around 50 billion tonnes of CO2e per year into the atmosphere, a sharp increase of 40% since 1990. In addition, we are facing a catastrophic sustainability crisis resulting in billions of people without access to the basics including housing, food, water and electricity. The world's poorest and developing economies rely on high emission energy sources like diesel and coal to power their communities. Enegix provides a viable alternative that can save the environment and countless lives.

“For us, hydrogen represents a version of the future we aspire to. A new way to power our lives without polluting and destroying what matters most, our home, the one we all share and must protect. It’s the catalyst for a new energy equality revolution that affords the chance to use this technology for good to address the plight of the billions of people without access to the basics; housing, electricity, water and food who when left behind remain powerless to change their circumstances. A hydrogen economy is possible now, we must take the initiative and build it so that everyone can benefit from the universe's most abundant element.”

Brazil provides a strategic location for our renewable hydrogen production with direct access to all major international markets via ocean freight and a deep sea port. Our location includes unparalleled opportunity for future green renewable power capacity increases as part of our commitment to secure and transform power into exportable hydrogen. 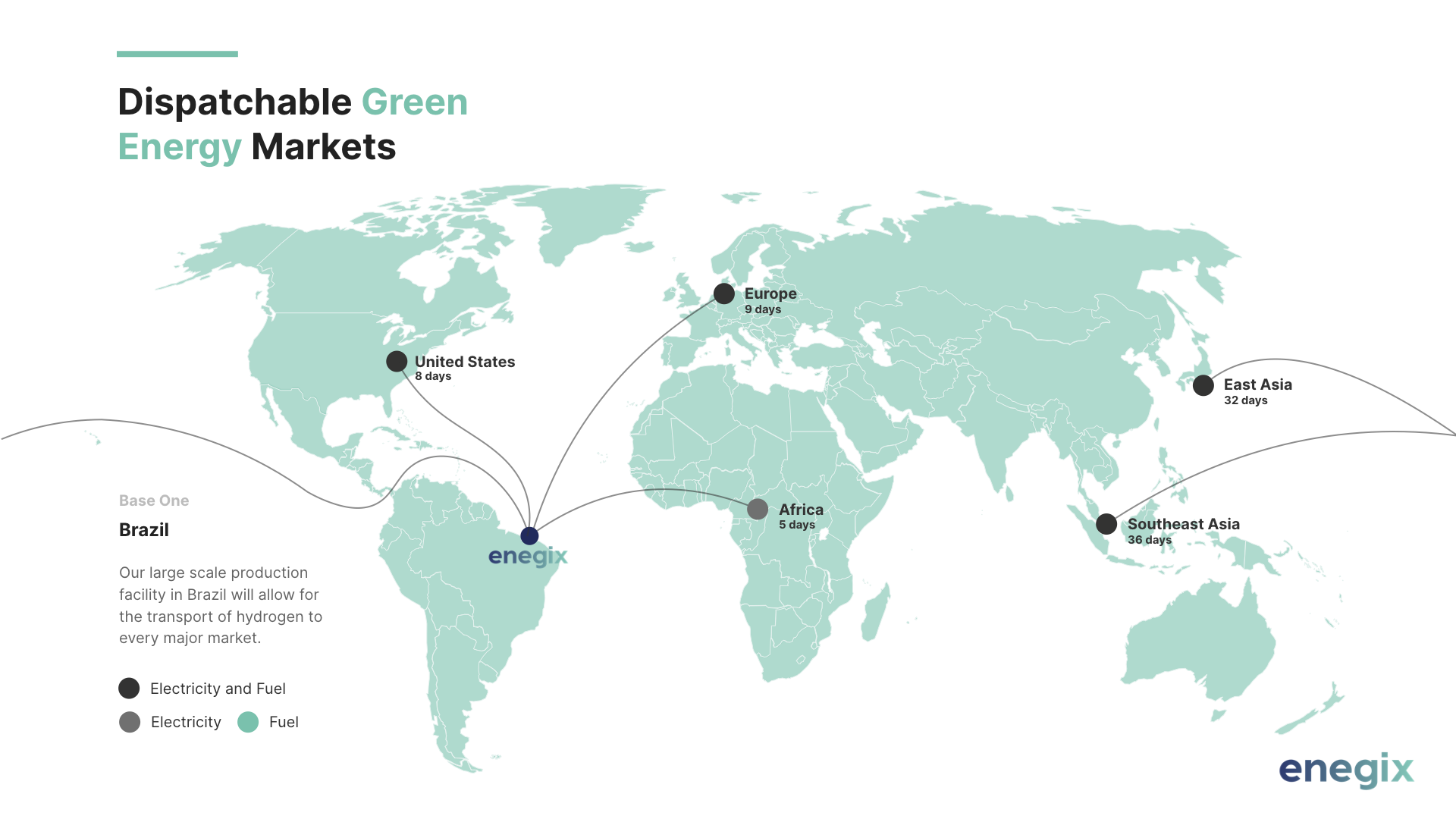 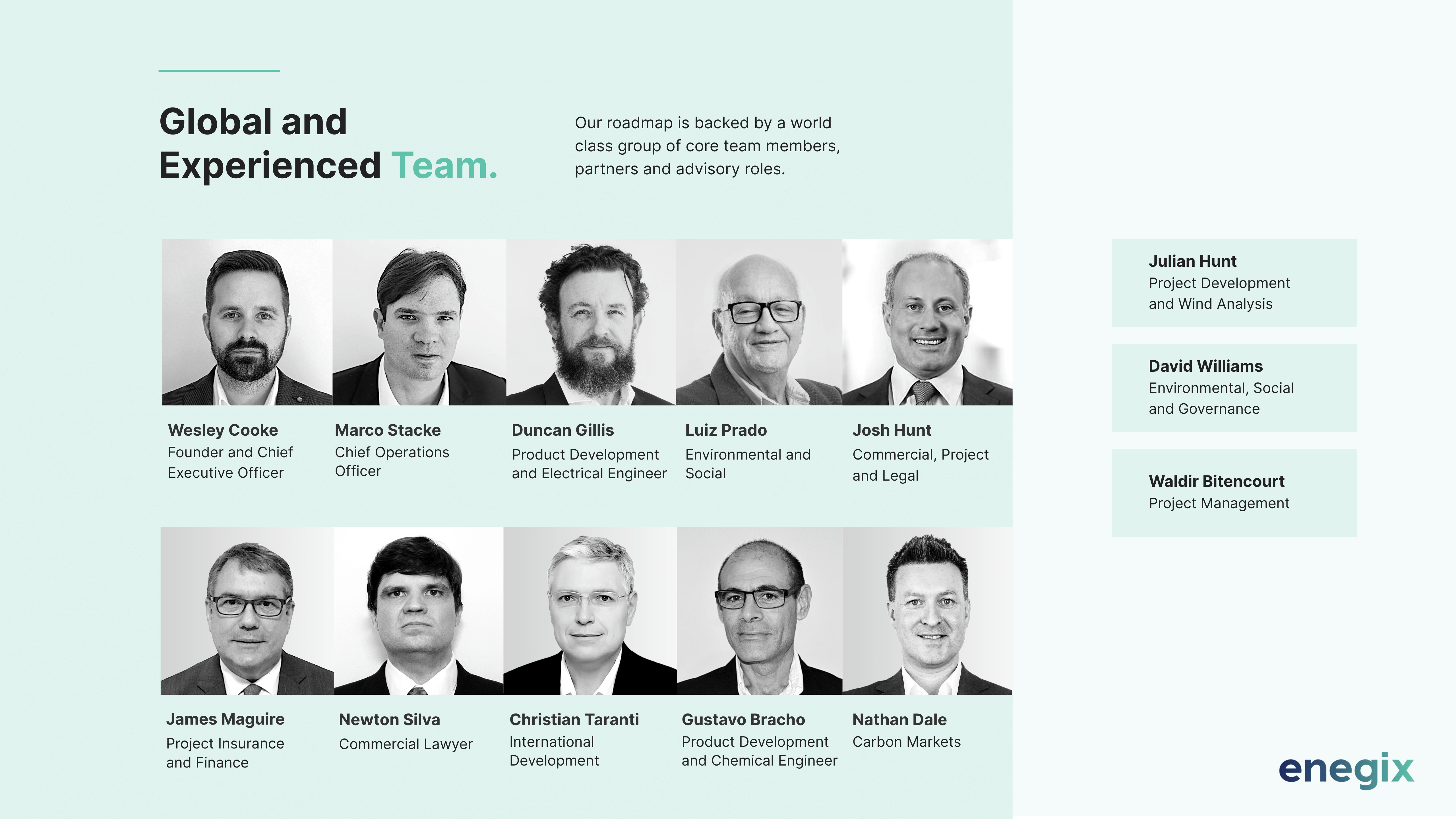 Enegix sponsors the Energy Transition Summit hosted by Climate Action in the lead up to COP26.

Enegix Energy partners with Black & Veatch for Base One, Brazil.

Enegix will be hosting a press event for media to answer questions about Enegix and Base One.

Explore our corporate presentation and discover how we are changing the future of power.

Our data room is available to investors globally and is accessed by request.

Stay informed of our progress by signing up to receive updates from us.

Thank you. You have been signed up to receive updates.

Something went wrong while submitting the form. Please try again.